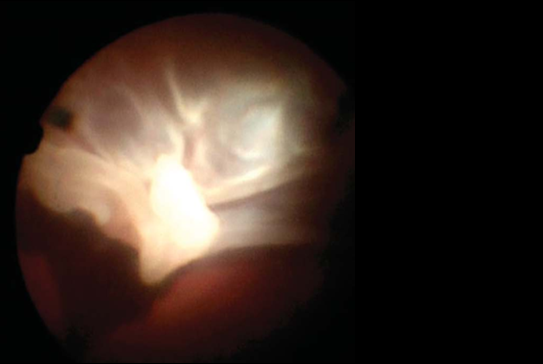 Dr Kolomeyer and colleagues from the University of Pennsylvania describe a case of Candida albicans endophthalmitis in a 19-year-old male with a history of drug use and a positive serum 1,3-β-D-glucan (BDG) test. They urge ophthalmologists to consider using BDG testing as an adjunctive test in cases of suspected fungal eye infections, especially when fever is also present or when the patient has a history of drug use.

Fungal endophthalmitis is a rare but serious infection of the eyes, caused primarily by Candida albicans or Aspergillus. Definitive diagnosis requires a positive culture from vitreous fluid, but ancillary tests such as serum 1,3-β-D-glucan (BDG) are also of use, particularly in surveillance of immunocompromised patients, as this is less invasive and may give a result up to 5-10 days earlier for some infections (e.g. Aspergillus) that are tricky to culture from blood. BDG can also be used to monitor response to antifungal treatment.

Dr Anton Kolomeyer and colleagues at the University of Pennsylvania described a case of a 19-year-old man who had been suffering from decreased vision, redness, tearing and photophobia in his left eye for several weeks.

Past medical history included intravenous drug use, hepatitis C and cellulitis of the left forearm, all around 7 months previously. Examination revealed low pressure (8mmHg) and dense membranous vitreous opacities. Serum tests for histoplasmosis and cryptococcosis were negative, but BDG was elevated at 428 pg/ml (normal range 0-79 pg/ml).

The patient underwent two rounds of pars plana vitrectomy (PPV) and received intravitreal injections of amphotericin B and voriconazole, followed by systemic voriconazole therapy. Vitreous cultures revealed the presence of Candida albicans. Despite going on to suffer a tractional detached retina from the fungal lesion, the patient eventually recovered.

The group also carried out a literature search that demonstrated utility for conditions including fungal endophthalmitis, fungal keratitis, or subretinal abscess, with testing carried out on vitreous fluid, tear fluid or serum.

The authors encourage ophthalmologists to consider using BDG testing as an adjunctive in cases of suspected fungal eye infections, especially when fever is also present or when the patient has a history of drug use. BDG testing is performed using various commercial kits and an incubating plate reader (405 and 490 nm). For clinical samples, contact your local mycology reference centre for further guidance.