Most cases of fungal rhinosinusitis are caused by either Aspergillus spp. (treated with intravenous voriconazole) or members of the Mucorales such as Rhizopus (treated with amphotericin B), but current laboratory staining techniques cannot always distinguish reliably between these causative agents. A group from Beijing tested a novel immunohistochemistry technique using anti-IFN-γ antibody that stained 93% of Aspergillus but only 4% of Mucorales in FFPE clinical tissue samples. 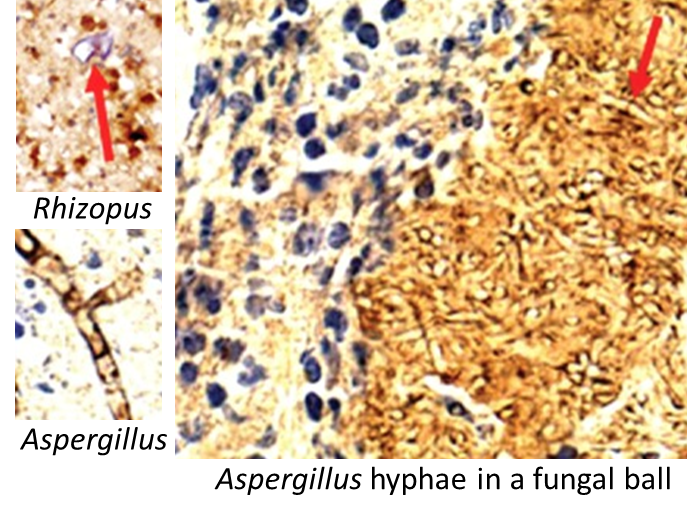 While fungal rhinosinusitis (FRS) is relatively rare, the consequences of an invasive infection can be severe – mortality rates in immunocompromised patients can reach 50-80%. Identification of the causative species is crucial as different species are susceptible to different antifungals: Mucorales (e.g. Rhizopus, Mucor) infections require treatment with amphotericin B, while Aspergillus infections are treated using intravenous voriconazole.

A recent paper by Yuyan Yan and colleagues in Beijing used fungal IFN-γ as a novel diagnostic marker to differentiate between Aspergillus and Mucorales in FFPE nasal tissue samples. IFN-γ is a cytokine secreted by certain human immune cells, but this group found that the antibody used to detect it (in this case purchased from Biorbyt) also stains the cell walls of Aspergillus hyphae and conidia brown.

When samples taken from FRS patients were stained with anti-IFN-γ antibody, 93% of Aspergillus samples stained positive, while only 4% of Mucorales samples did so.  Interestingly, both false negative Aspergillus samples were taken from fungal balls (other samples were either invasive or allergic disease). In contrast, conventional fungal stains (H&E, PAS, GMS) were not able to differentiate between the species adequately, particularly in damaged samples where hyphal morphology was distorted.

N.B. The molecular target of the antibody in Aspergillus is not yet known (fungi are not known to produce cytokines such as IFN-γ).